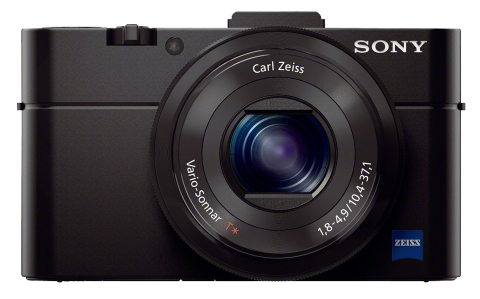 The Sony RX100 II has been called by many the best pocket camera. In this episode of All About the Gear, Frederick Van Johnson and I explore why.

The RX100 II is a true pocket camera with a fairly high (US$750) price tag. Other trustworthy review sites (Camera Labs, The Wirecutter) say it’s the best, and so long as you accept the price, I think they’re right. The #1 feature of this camera is its excellent image quality.

The RX100 II was released in June 2013, about a year after the original RX100. The fact that Sony branded it “mark II” tells you the previous version was a successful camera, and as you might expect, the changes are relatively minor. In addition to an improved sensor, the camera now has a hot shoe that accepts standard flashes but has additional contacts for Sony-specific features. Sony offers their own flashes, electronic viewfinder and microphone that fit the hot shoe.

For casual use, rather than trying to customize a camera that has very few knobs and buttons, you can just throw the camera into Sony’s Intelligent Auto mode and shoot away. You’ll be happy with the results in most cases. For more serious shooting, your best bet is to switch to (P)rogram mode and use Program Shift to select the aperture/shutter combination. It’s a lot easier than using the Aperture Priority, Shutter Priority or Manual mode on the RX100 II.

I recommend Auto ISO in almost all cases. The camera handles high-ISO quite well for a sensor this size with relatively little noise.

If you want to get fancy, switch to Center Spot for both focus and exposure and learn to focus, set exposure and recompose before shooting as a way of going pseudo-manual.

The RX 100 II feels fairly solid and dense as do most point-and-shoot these cameras. I’d say there’s nothing particularly remarkable about the body one way or another.

As is also common, many of the buttons and dials can be configured for different functions. Whenever I get a new camera to review, I first try and customize it to make it similar to my own cameras. But with point-and-shoot cameras I almost inevitably reset everything and make it work just like it did out of the box. Such was the case with the RX100 II.

In manual mode, the RX100 II works more or less like a traditional camera. The ring around the lens defaults to selecting aperture while the rear dial controls the shutter speed.

The rear Fn button defaults to Quick Menu mode, which gives you a shortcut to auto/manual focus, ISO and white balance.

The 1″ sensor is the same size as found in the Nikon 1, which is a 2.7x crop as compared to a full-frame sensor.

The one substantial change from the original RX100 is the addition of “back illumination” to the 1″ 20MP sensor. This means the connections to the photo sites are made on the rear of the sensor so that all of the surface area is available to receive and capture light. The results are a sensor that is about one f-stop more sensitive.

Like most cameras that are also intended to be used for video, the RX100 II has a low-pass anti-aliasing (AA) filter to minimize moiré effects.

The maximum shutter speed is only 1/2000 second. This means that on a bright, sunny day you may not be able to shoot wide-open at a wide angle, where the aperture is only f/1.8. There’s just too much light, even at the minimum ISO of 160.

The autofocus on the RX100 II seems quite good for a camera in this class. The focus tracking also work well, particularly when face detection is enabled. Focus tracking doesn’t appear to work in Flexible Spot mode, so you’re limited to using the Center Spot mode for tracking.

Unfortunately, this camera is a disaster for those who want to focus manually. While it’s easy to switch to manual mode, the focus-by-wire ring around the lens requires that you turn, and turn and turn some more before getting your image to focus. This is something I just don’t get. Maybe I had some setting wrong or never figured out how to use it properly, but I found I had to rotate the ring many times to focus my images. It’s too bad, too, because the focus peaking works quite well. The only solution is to use Sony’s DMF mode to first autofocus, then fine-tune manually. Still, it’s slow and awkward.

The rear LCD screen is good, but nothing to write home about. It’s a 3″ screen with 1.229 million dots, the same as the previous version. But unlike the original RX100, the Mk II’s rear LCD screen now tilts up 90 degrees and down 45. The screen is not, however, touch sensitive.

As a true point-and-shoot, the RX100 II has no built-in electronic viewfinder (EVF). However, the hot shoe does accept the very good external FDA-EV1 for those who really want a viewfinder. This is the same viewfinder that you can add onto the Sony RX1R. The only problem, other than the fact that it makes an otherwise pocketable camera much larger, is that the EVF costs US$450 or 60% of the cost of the camera! For a total of US$1,200 total, it becomes quite an expensive package.

Along with the excellent sensor, the Carl Zeiss Vario-Sonnar T* zoom lens is the co-star of the RX100 II. As I’ve said, image quality is the camera’s forte. If there’s one disappointment it’s that the zoom range is only 3.6x. I frequently found myself wishing I could go just a bit longer or (particularly) wider. The equivalent 35mm full-frame equivalent lens would be 28-100mm. At the shortest focal length (28mm equivalent) the widest aperture is f/1.8, but at the longest focal length, the aperture is reduced to f/4.9. The smallest aperture is f/11, so again combined with the fastest shutter speed of only 1/2000 second there are some very bright situations that can be too much the camera. (That’s theoretical. I didn’t actually encounter any such situations in my tests.)

At the widest angle, the lens will focus as close as 2″, making it reasonable suitable for some macro situations.

The video quality is generally good. The camera shoots up to 1080p at 24/25, 25/50 or 30/60 fps, depending on your local standard. The micro “D” HDMI output can stream at up to 28mbps. Sony managed to squeeze a pair of stereo microphones into the body, but for an external microphone connection you’ll need to add the hot-shoe adaptor.

My only complaint about shooting video on the RX100 II is the so-called digital zoom. Like all pocket cameras (that I know of) the zoom is by-wire. You can’t control the zoom rate, but in exchange you do get a smooth, steady zoom. As you reach the longest focal length, however, the zoom pauses then keeps going into the digital-zoom zone. What you see is an increasingly narrow field of view, but all that’s happening is that the camera is cropping the frame. In other words, you’re throwing away pixels to give the impression of a zoom. I don’t have a problem with this for video except that there’s no way to turn it off. Furthermore, you need to pay attention to know you’ve entered that mode or you might end up with a lower-resolution video than you expect.

The RX100 II does have WiFi with NFC setup, but it’s the wimpy Sony flavor. You can’t download and install apps like you can on the NEX-6 or A7 cameras. You can connect to the camera via Sony’s PlayMemories app on iOS and Android devices, but the functionality is quite limited. You can zoom, focus, shoot and transfer images, but not much else.

The most obvious competitor is Canon’s PowerShot S120 (US$450) which has a wider-range 5x zoom and a touch screen, but only a 12MP sensor. It’s a great little camera and 40% less expensive. The RX100 II has the S120 beat, however, by most image-quality criteria.

Other reviews have also suggested the Lumix LF1 (US$500) with a 12MP sensor and 7x zoom. I’ve never used the LF1, so I can’t offer you a first-hand opinion.

The optical SteadyShoot stabilization is effective and helps a lot when you’re using slow shutter speeds due to the fact that the lens isn’t too fast at long focal lengths, where camera shake is most noticeable.

The RX100 II has a USB “Multi Terminal” for transferring images, etc. But this is also how you charge the battery. No separate battery charger is included. The battery is rated at 350 shots, but I doubt anyone gets that many. On one hand, the battery life is poor given the necessarily small size of the battery. This is compounded by the fact that you can’t shoot with one battery while charging another. On the other hand, a camera of this type isn’t one you typically expect to use for hundreds of shots in a day.

The camera has a built-in flash, suitable for fill

There is no GPS receiver.

If you want the best-possible image quality in a pocketable camera, regardless of price, the RX100 II fits the bill. In its favor are the excellent image quality, good high-ISO performance, compact size, and decent fill flash. The “cons” are the high price and relatively short zoom range, but those are the tradeoffs for the superior image quality.

Do not waste your money on the external electronic viewfinder unless you have money to burn.

I agree with Gordon Laing that this may be the best point-and-shoot camera on the market today, but if cost is an issue, check out the Canon S120.