One of the primary benefits of working in the Lab colorspace is the ability to make very dramatic adjustments to color without affecting luminance. Take a look at the image below, which is pretty much straight out of the camera, a Sony NEX-7. (Click on the images to see them larger. It helps with this discussion.) While it appears dark and drab, you can see there’s some reddish-brown in the structure. When I saw them live, the hanging lights appeared pure white. But as you can see, they not only have a bit of color, but the color appears to vary from light to light.

My goal was to enhance the colors and to create a holiday red-and-green look to the scene. At the same time, I wanted to maintain the green in the small Exit signs. (Yes, you need to click and look at the larger version!)

Lab colorspace to the rescue!

The image below shows what I was able to do with not much more than a Curves Adjustment Layer in Photoshop in the Lab colorspace. I anchored the a & b channels at the zero-zero crossover point. I then steepened both a & b quite a bit to enhance the existing color. From there, I played with the a channel (green-magenta) until I got close to the red and green I was looking for, then added a bit of yellow in the b channel (blue-yellow). 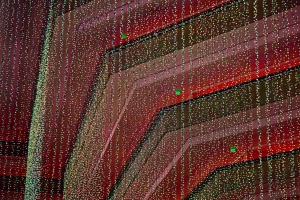 By enhancing the color contrast I was able to bring out the shape and depth of the architecture. I was also able to turn what appeared to be white lights into an array of multi-colored ones. What you’re seeing in the lights is a substantial amplification of the color variations, thanks to very steep a & b channel curves in Lab color.

Note: I also used the ALCE v2 plugin (radius=180) to enhance the local contrast and emphasize the structure of the building.