My friend, Roxanne Bouché Overton (roxanne_overton on Instagram) has been developing a collection of techniques she calls Intentional Camera Movement or ICM. Many of her images are just that: moderately long exposures (perhaps 1/10 to 1 second) during which she moves the camera up, down, side-to-side, perhaps in a curved motion, forward/back or zoom in/out. As you can see from her Instagram feed, she’s become quite good at it.

But a few days ago I attended a presentation she gave, and at the end she showed the results of another variation on the technique. Here are two of her images. I think you can see why I was intrigued. 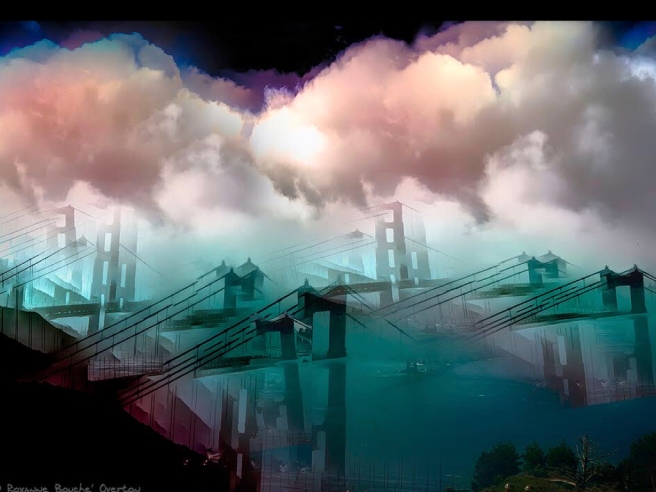 Based on what she explained, I decided to give it a try. Here are my first results: 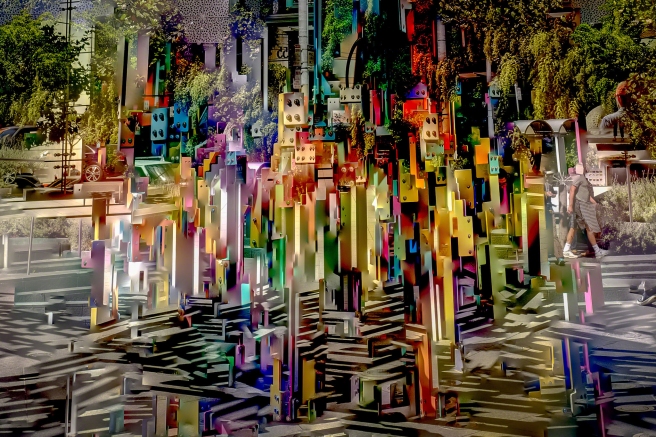 “Walk This Way” by Doug Kaye

So, how do you do this? It’s remarkably simple.

First are the exposures. Unlike Roxanne’s other ICM work, these are not long exposures, but rather traditional short-exposure shots. There are multiple handheld images. In the case of “Cityscape #1”, I photographed a street sculpture by walking around it, shooting about 20 images from all 360 degrees. Here are two samples of the individual images: 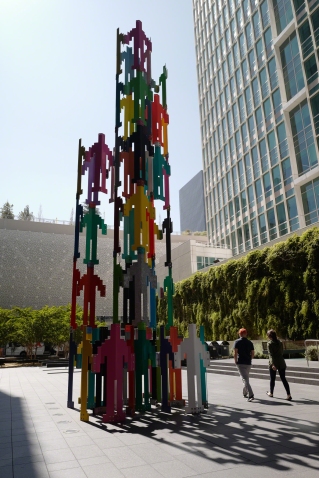 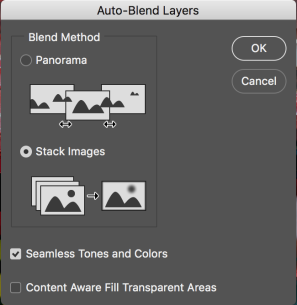 (Note that sometimes I check Seamless Tones and Colors, but other times it works better without.)

That’s it! Seriously. It’s almost embarrassingly simple. I flatten the image (merge the layers) and save. The resulting image is automatically returned to Lightroom.

What’s going on here? Auto-Blend is typically used for processing focus-stacked images, most often for macro photography. Photoshop creates a layer mask for each image (layer) then analyzes the overall image, one very small region at a time. For each region, it looks at each layer and determines which layer can provide the sharpest sub-image for that region. It then “masks in” that region on that layer. When the layers are merged, you have an image with the maximum sharpness in each region.

But that’s for focus stacking. In this technique, Photoshop is trying to do the same thing, but because the camera or subject have moved from one exposure to the next, Photoshop is merging parts of the subject that may not be in the same region from one layer to the next. You never quite know what you’re going to get, but with practice you can get an idea of what subjects, angles, lighting and lenses will yield the best results. (All of my images above were JPEGs captured with a Leica Q, 28mm, in full-auto mode.)

Not all resulting images are made with 360-degree coverage. For example, for “Walk this Way” I barely moved the camera between exposures. For “Cityscape #2” I purposely moved it a bit up/down, left/right between exposures. And for “Bike 363” I moved about 180 degrees around the motorcycle. In all cases, I’ve cropped the resulting images to emphasize the most interesting portion of the results.

Check out Roxanne’s other work and give this technique a try. It’s a lot of fun. And let me know how it goes! 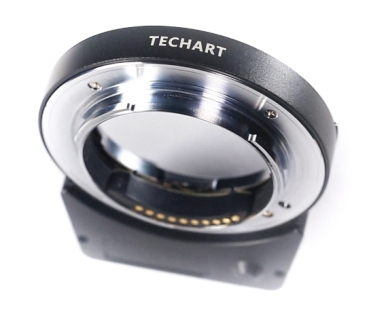 This post is ostensibly a review of the TechArt Pro Leica M-mount to Sony E-mount lens adaptor, but I’ll start with a bit of the story as to how I came to be interested in such a device.

During the first year of All About the Gear I reviewed the Leica M 240 camera. I was particularly impressed with those expensive Leica lenses we’ve all heard so much about. I was less impressed with the $7,000+ camera body, which I swore I’d never buy. But those lenses! Sharp, contrasty, small, light…gorgeous. END_OF_DOCUMENT_TOKEN_TO_BE_REPLACED

My next photography workshops in Cuba (legal from the U.S.) are November 5-14, 2015 and January 7-16, 2016. The cost is $4,495 per person, double occupancy (plus $350 for singles) and includes nearly everything except your costs to/from/in Miami. There are still open slots for the November 2015 workshop. The January 2016 workshop is currently sold out, but we’re accepting people to the waiting list.

At 12:05am on January 16, sixteen photographers and their partners were the very first Americans to land in Havana under the new rules announced in December by President Obama. There was no fanfare, just the usual midnight airport skeleton crew that took two hours to x-ray our bags. One of us did get “special treatment” for arriving with enough gear for a feature-film crew and what could have been mistaken for a suicide vest. For most of the group, it was everyone’s first visit to Cuba.

END_OF_DOCUMENT_TOKEN_TO_BE_REPLACED

I’m about to run out of disk storage for my Lightroom image catalog, so in preparation for a new iMac — one that supports a Thunderbolt disk system — I’ve decided it’s time to upgrade my backup systems. This is a long blog post, but it thoroughly covers what I’m now using for backup and what I learned in the process of getting to the final result.

My backup strategy for the past three or four years was “pretty good”. My first-level backup was from my iMac to an Apple Time Capsule via Time Machine. For the second level, I made two copies at the end of every month of each of my internal SSD and 2TB rotating drive to two pairs of portable USB drives. Why two sets of removable backups? One set I kept off site in a storage locker. The other set I kept here at home for two reasons: (1) I’m actually paranoid enough that I wanted one set always off site (i.e., not in-transit) so I took a new set to the storage locker each month and only then retrieved the previous month’s set. Otherwise I’d have both the old and new sets at home simultaneously; (2) Although I’ve never had to recover from a major disaster like fire or theft, I have occasionally needed to recover a corrupted or accidentally deleted file. Having a full backup here in the house makes that very easy. Sure, I’ve got Time Machine, but I’ve had that completely fail on me and lost everything on the Time Capsule. Time Machine by itself is not an adequate backup solution.

My new requirements are as follows:

After lots of research and testing, here’s what I’ve ended up with:

I sync each of the two drives in my iMac to a separate shared folders on the local NAS backup server every six hours using Carbon Copy Cloner. Once a day, at midnight, I then replicate the shared folders on the local and remote backup servers using Synology’s built-in shared-folder syncing. I’m storing the files on the NAS servers in sparsebundles, the same format used by Time Machine. The synchronization uses the standard rsync utility, which transfers only disk blocks that have been modified since the last pass.

I don’t recommend this solution for beginners. I’ve got quite a bit of experience configuring and managing Linux servers, so these DiskStations are almost like old friends to me. Synology has done an excellent job in making their servers easy to setup and manage, but I still think it would be a bit scary and frustrating for someone who wasn’t already familiar with Linux and disk/file servers.

Intermission: If all you care about is the solution, you can stop here. But if you want to understand why I’ve settled on this solution for backup, and the tests and considerations that went into making these selections, read on!

END_OF_DOCUMENT_TOKEN_TO_BE_REPLACED

Sony updates its very popular RX100 MKII with a new third version. The camera is already being heralded as the best-ever compact or point-and-shoot. But at $800, it’s also the most expensive. The new model touts a cool pop-up electronic viewfinder (EVF) in lieu of a hot shoe, and an excellent new lens that mimics a fast (f/1.8-2.8) mid-rage 24-70mm (full-frame equivalent) zoom. The image quality is great, but at that price, Frederick Van Johnson and I ask, “Who’s this for?”

Update: It appears this entire project is no longer necessary. When I did this a few months ago, no one was offering an intervalometer for the Sony Multi-Terminal port. Now it appears there are some out there: http://goo.gl/Iy4zMJ

One weakness of the Sony a7/a7r/a7s and a6000 ecosystems is the lack of an intervalometer. There are a few options like TriggerTrap, but that and some others depend on a mobile phone, which seems unnecessarily complex and unreliable. There are a number of videos and articles demonstrating how to combine a Sony remote and an inexpensive intervalometer, but they don’t provide enough detail for those who don’t want to experiment. Here are the step-by-step instructions.

I used a Sony RM-VPR1 wired remote and this intervalometer. You’ll also need some two-conductor narrow gauge wire (~22 gauge works), a soldering iron, and optionally a connector if you want to be able to use the remote without the intervalometer attached.

(Not shown: the cable that connects the Sony remote to the camera.)

Four external screws and one that secures the circuit board to the case.

Use a small knife or drill to cut a notch into the rear of the remote’s case for the wire to pass through.

4. Solder the wire to the remote’s switch.

Solder the two-conductor wire to the remote’s main switch as shown above. (Click to enlarge.)

5. Cut the connector off of the intervalometer.

I left about 8″ of wire coming out of the intervalometer.

6. Use a connector to mate the intervalometer to the remote.

I used a 3-conductor molex connector as shown above. Because I keep the two components connected all the time, I’ve secured the connector using cable ties as shown earlier.

Connect the remote to the camera. Both the remote and the intervalometer should be able to trigger the shutter. Don’t forget to enable the remote in the camera’s menus.

Route the wire through the remote as shown below. This will act as strain relief and won’t interfere with the operation of the remote’s buttons.

That’s all there is. You should now have all of the intervalometer’s functions as well as the original functions of the Sony remote.

The Sony A7s is being heralded as “Camera of the Year” by some reviewers, Frederick and I take a look at the third camera in Sony’s a7 series. While offering a sensor with only 12MP, the a7s is getting a lot of attention for a sensor that can shoot up to ISO 409,600 as well as being one of the first still-image camera that also produces 4K video.

Does it live up to all the buzz? And who really needs a camera that can shoot in the dark? And what about that 12MP sensor? Isn’t that really heading in the wrong direction? I explains why 12MP may be enough for you and why a high-ISO sensor may be important to everyday photography.

The long-awaited latest Lumix “G” flagship camera breaks new ground: It can shoot 4K video and save it directly to an SD card. So this week we invited video guru Dave Dugdale to join Frederick and me to give us his two cents.Dave and I put the GH4 through some very different paces. I wanted to see what would happen if he shot 4K video specifically with the goal of extracting still images. Check out how well the GH4 did in both our tests.

The a6000 replaces Sony’s NEX-6 and at only $600 (body only, street price) you might think this is just another entry-level camera, comparable to a point-and-shoot. But you’d be wrong. Sony claims this is the world’s fastest autofocusing mirrorless camera and is now the top-of-the-line in their APS-C sensor line.

I put the a6000 through some serious usage tests including an intense week of shooting on the streets of New York City. And while Frederick and I lament the fact that Sony still doesn’t appear to understand the value of features like touch screens and external mic jacks, you’ll also hear whether I think the a6000 is a good choice regardless of these weaknesses.