Over on Google Plus (Facebook, too) I usually list the gear and post-processing apps I use for each image. The other day someone asked my, “Why are you using [Nik’s] Silver Efex Pro for a color image?” A reasonable question I’ll answer here.

For the past few months, Scott Loftesness and I have been researching and experimenting with a variety of post-processing techniques based on replacing RGB channels and using the Lab color mode. Our mentors (actively or passively) are Dan Margulis, Lee Varis and Mark Lindsay. One fundamental concept to all of our work is the separate processing of luminance (brightness) information and color. There are two principal methods for doing this: In Lab color mode the L (luminance) channel controls brightness and has no effect on color, which is managed in the a and b channels. Similarly, if you’re working in RGB color, Photoshop allows you to control luminosity and color separately by using blend modes. Setting a layer’s blend mode to Luminosity means only its brightness information will be used to modify layers below. Likewise, setting a layer’s blend mode to Color will cause its brightness data to be ignore and only its color (hue and saturation) to override what’s below.

Virtually all of the techniques we’ve learned from Dan, Lee and Mark involve steps such as finding and using one or more of an image’s ten color channels (RGB,Lab,CMYK) as a replacement for the overall luminance control of the image. These luminance layers may then be tweaked for contrast, sharpening, etc. Sometimes we also paint (dodge and burn) specific areas in the luminance-only layers. Scott and I have developed pages and pages of notes documenting the various techniques for managing luminance separate from color.

But recently I had a breakthrough. I realized I use Nik’s Silver Efex Pro 2 for virtually all of my monochrome images. It’s an amazing tool for this purpose. Not only can I control the mix of how the RGB and CMY channels contribute to the results, but it gives me terrific control over contrast, brightness and structure. Oh, and it has unique control points that allow one to make most of the same adjustments on isolated portions of an image.

My ah-ha! moment came when I realized that instead of all the more-exotic techniques I’ve been using, I could just use Silver Efex Pro to create the luminance channel for my color images. It’s far simpler than most of the other methods and I already have a lot experience with it. So if you’re using Silver Efex Pro for your monochrome images as well as Photoshop, give this a try.

Below is an original image, pretty much straight out of the camera. (Click on any image to view larger.)

I open this image in Photoshop then duplicate the background layer. I optionally convert the copy into a Smart Object so that I have the ability to go back and change it later. Then I select Filter->Nik Software->Silver Efex Pro 2. After adjusting the b&w image it looks something like the following.

Note some of the luminosity changes I’ve made in Silver Efex Pro:

Back in Photoshop, the b&w image is in the layer above the color image. I change the blend mode of this top layer to Luminosity: 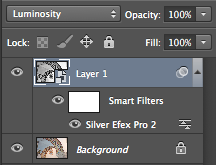 The results are the image below:

If I’ve picked up too much noise from Silver Efex Pro — it typically comes from increasing the Fine Structure — I add a low-radius Gaussian Blur to the luminance layer in Photoshop and adjust the opacity of the blurred layer.

You may or may not like the results. That’s okay — I’ve exaggerated everything for the sake of the demonstration. If the effect is too strong, you can simply reduce the Opacity of the top layer. And if you did convert the top layer into a Smart Object you can go back to adjust the results. But I think you’ll get the idea: I’ve used Silver Efex Pro to create an image with the luminosity values I want, then applied that to the full-color image.

Separate from this discussion, but in case you’re curious, here’s what happened to to colors after I enhanced them using the Lab color mode techniques I’ve discussed previously. The difference between the image above and the one below are in color only. They have identical luminosity values. 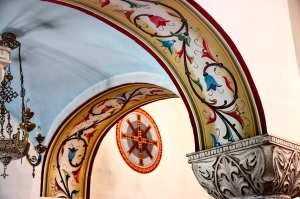 Adjusting these sliders is similar to Photoshop’s Black & White adjustment layer. You’re modifying the brightness of the areas that are originally brightest in each of the RGB and CMY channels. If, for example, you slide the Red slider all the way to the right and all the others full left, you’re essentially working with just the R channel. But it’s a lot simpler and easier to change than if you have to manipulate the channels in Photoshop. (Sometimes, if the color sliders in Silver Efex Pro don’t seem to have enough range, I boost the color using Lab color mode before going to the Silver Efex Pro filter.)

After settling on the balance of the six color channels, I pretty much work my way top-down in the Silver Efex Pro panel: Brightness, Contrast and Structure. Then I go through the image and add Control Points and adjust them as necessary.

Give it a try and let me know what you think.

One thought on “Silver Efex Pro for Color Images”