Although much of the buzz this year has been about small, mirrorless cameras, the big-boy DSLR makers (Nikon and Canon) haven’t been entirely asleep at the switch. The new Canon 70D is most notable for it’s groundbreaking Dual Pixel CMOS autofocus sensor, which is used in video and Live View modes. The Canon 70D and an explanation of autofocus technologies are the topics of this episode of All About the Gear.

Thanks to our friends at BorrowLenses.com, I had a 70D and an assortment of Canon lenses to test for two weeks. For me, what’s been most interesting has been to learn what it’s like to shoot with a Canon DSLR. That’s because I’ve been a Nikon guy since 1971. Yup, this was the first time I’ve ever used one of those “other” cameras, so I thought that would be an interesting perspective for this review. I’ll get to that after we go through the usual stuff.

I should state at the start that I’m an outlier when it comes to my assessment of the Canon 70D. Most reviewers think it’s a great still-image camera including my friend and fellow TWiP co-host, Derrick Story (Canon 70D Lives Up to the Hype). I’m not similarly impressed. I think the Dual-Pixel autofocus technology is exciting and this is a good DSLR for video (if you want to use a DSLR for video), but maybe it’s because I’ve recently tested such great cameras as the Fuji X-E1/E2 that I found the 70D rather unimpressive in still-image quality given its price.

Here are the highlights:

The 70D’s sensor is about average for a recent APS-C DSLR. I found the color and dynamic range to be weak for a US$1,200 camera. The high-ISO (low light) performance was a bit weak for a camera in this class. In short, there are many other cameras with more impressive sensors at this price, although you may have to get away from DSLRs and go to mirrorless bodies to find one.

Again, consider that other reviewers disagree with me. Derrick Story wrote, “Terrific low light/high ISO performance”. For me, the camera topped out around ISO 800, which I don’t consider at all “high” by today’s standards. Gordon Laing over at CameraLabs.com wrote, “The Canon EOS 70D is one of the most capable all-round cameras I’ve tested, DSLR or otherwise.” This is one of the few times I’ve arrived at a different conclusion than either Derrick or Gordon. I hope it’s not just due to my greater exposure to Nikon gear than to Canon.

For detailed explanations of the various autofocus technologies, you might want to start by reading a separate blog post I’ve written on the topic and/or watching the above video of All About the Gear episode #9. I’ll assume you’ve got an understanding of these technologies as background.

When shooting sill images not in Live View mode, the 70D’s autofocus uses a 19-point cross-type phase-detection sensor borrowed from the 7D. It’s the autofocus in Live View and video modes that has generated all the buzz about this camera.

The 70D is Canon’s technology showcase for their new Dual Pixel sensor, which adds phase-detection (PD) directly to the camera’s image sensor. Normally, PD elements are found only on the separate autofocus sensor that works when a DSLR’s mirror is down and blocking the image sensor. But because Canon has figured out how to add phase detection to virtually every pixel on the image sensor, these autofocus points can be used in Live View and video modes (ie, when the mirror is up). In fact, the autofocus of the Canon 70D in both Live View and video modes is better than any other DSLR I’ve used. Unlike other hybrid (PD on the image sensor) technologies from Sony, Fujifilm and Olympus, the 70D allows the autofocus area to be anywhere except the 20% outermost edges of the image.

Video is the big winner here. There’s almost none of the annoying hunting that we’re so used to with most DSLRs and mirrorless cameras in video mode. That hunting gives our videos a very amateurish look, which is one reason pros never use autofocus during a shot, but instead adjust focus manually. Tracking in video mode seemed to be particularly good when face tracking was used to follow faces. That it does quite well. Non-face object tracking was not as good (depending on the object) and easily fooled.

Because it uses phase detection and the LCD is a touch screen, the 70D does a great job simulating a focus pull in video mode. You can’t control the rate of the focus change, but all you need to do is touch the foreground or background object to which you want to shift the focus, and the camera does it smoothly and (if you’re using one of the new STM lenses) quietly.

Canon’s Dual Pixel autofocus isn’t perfect, but it’s a substantial improvement and raises the bar for all manufacturers of cameras that shoot both stills and video.

The 60D was (I think) the first Canon DSLR to have a fully articulating LCD. The 70D’s LCD works in the same way: you can swing it out, tilt it up or down or flip it around to face the front, which is great for shooting stills and particularly stills and videos of yourself alone or in a group. What’s new in the 70D is that the LCD has become an excellent touch screen as well. 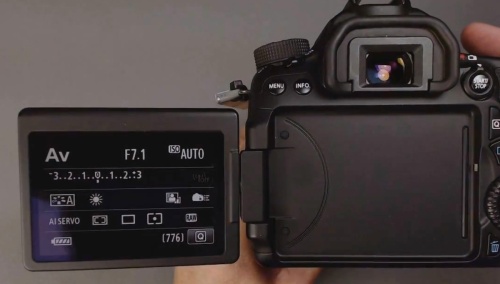 The Menu button has been moved to the upper-left rear corner and replaced with a (Q)uick button, which has become so common on smaller mirrorless cameras. The 70D’s Quick menu is one of the best I’ve used because the icons and controls are large and clear. Some other camera manufacturers have squeezed so much into their touch menus that it’s hard to use them precisely. Think of the accuracy of typing on a mobile-phone keyboard as compared to the one on your computer. 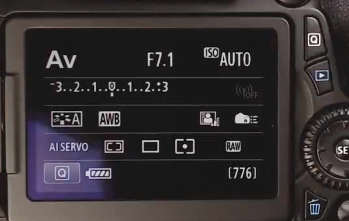 I had a chance to use five Canon lenses for these tests. Two were EF-S image-stabilized (IS) zooms designed for cameras like the 70D with smaller cropped sensors, the other three were EF primes that can also be used on cameras with larger full-frame sensors. Three of the lenses had Canon’s Ultrasonic (USM) autofocus motors, which are considered too noisy for use with the internal microphone and probably with a mic mounted on the hot shoe as well. The other two lenses use Canon’s quieter STM stepper motors for autofocus. And yes, they’re much quieter.

It’s clear that Nikon and Canon DSLRs are more alike than they are different. That’s probably because of the decades these two vendors have played leapfrog with one another. Every time one of them has added some new feature, the other has done the same and more. At this point, the differences between their product lines are probably more style than substance. To be honest, if I hadn’t started with Nikon more than 40 years ago because I got one as a wedding gift, I could be just as happy with Canon gear. Sorry if you thought I might settle the Nikon vs. Canon debate. The differences just aren’t enough to declare a winner. Having said that, however, it did take a while to get used to the 70D. The biggest problem was the difference in the philosophy and implementation of the controls. 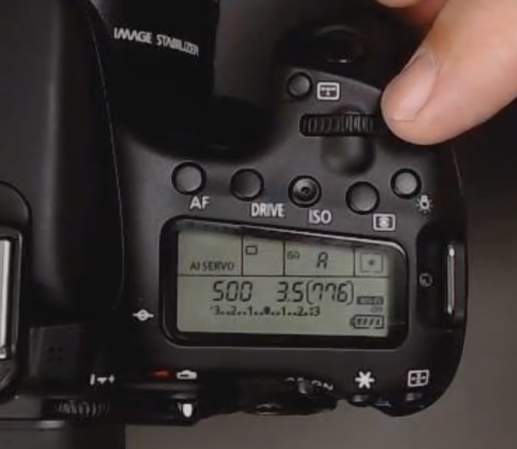 What’s with all those buttons? I’m told they’re pretty standard for Canon DSLRs. There are so many buttons on the top, they had to add a dimple to one of them (the ISO button in the image above) so you can find your way around the 70D. It’s a damn keyboard up there! There are six buttons plus a control wheel and the shutter release on the top of the camera, plus four more along the top-right rear.

But overall, once I adjusted, I found the controls to be as good as Nikon’s although still not as nice as those on the smaller cameras by Olympus, Panasonic, Fuji and Sony Alphas.

For a still camera that shoots video, where video is very important, the 70D is hard to beat. But if your needs are more towards still images than those that move, even after two weeks I’m just not all that impressed with the 70D for still photography. For the still-photography mission, I think you should at least consider these other cameras:

[Note: The above comparisons are partially based on quantitative testing by sites such as DxOMark, which while helpful don’t always tell the whole story.]

I’m not saying that Nikon is better than Canon, but I don’t believe this Canon camera beats the equivalent cameras from Nikon, Sony, Fuji, Panasonic/Lumix or Olympus except maybe for shooting video.

So who should consider the 70D?

If you already have an investment in Canon lenses and want to use them for video, this could be a good camera for you. With a great articulating LCD, touch focusing and the new Dual Pixel autofocus technology, the 70D is probably one of the best DSLRs for video, even if it’s a so-so performer as a still camera.

Likewise, if you’re just getting started and for some reason want to go with Canon products — maybe your father is going to give you his old lenses — the 70D is a reasonable stepping stone, particularly if you want to shoot video.

As far as lenses, I’ve already recommended the EF-S 18-155mm macro kit lens. Other STM (quiet focusing) lenses are also good for video. The two EF primes I tested (50mm f/1.4, and 85mm f/1.8) are USM (not STM) lenses and therefore a bit noisier while autofocusing, but they’re compatible with full-frame Canon bodies (should you upgrade later) and well worth their costs.

Finally, if you want an even more detailed review of the Canon 70D, check out the one by my friend Gordon Laing on Camera Labs. Also check out the soon-to-be-published book all about the 70D from Nicole S. Young.