Although much of the buzz this year has been about small, mirrorless cameras, the big-boy DSLR makers (Nikon and Canon) haven’t been entirely asleep at the switch. The new Canon 70D is most notable for it’s groundbreaking Dual Pixel CMOS autofocus sensor, which is used in video and Live View modes. The Canon 70D and an explanation of autofocus technologies are the topics of this episode of All About the Gear.

In a to-be-published edition of All About the Gear (#9, Canon 70D) I explain the differences between all the autofocus technologies: contrast, phase-detect & cross-type and Canon’s new Dual Pixel system. It’s a complicated and important enough topic that I’ve decided it’s worth a blog post all its own.

END_OF_DOCUMENT_TOKEN_TO_BE_REPLACED

Okay, I admit it. I’m a geek. There’s an abundance of evidence for this, not the least of which is that I fine-tune the autofocus for nearly all of my body/lens combinations.

What is autofocus fine-tuning (a.k.a. focus micro adjust)? Pretty much what it sounds like. It’s a feature built into most high-end DSLRs and other interchangeable-lens cameras that allows you to correct for small inaccuracies in autofocusing on a lens-by-lens basis.

Before diving into this, let’s consider the obvious question: Do you need to do this for your camera and lenses? Generally not unless you typically shoot with your lenses at wide-open apertures. Once you stop your lenses down by two stops or more, the depth of field usually increases to the point at which the default autofocus adjustment is fine. But if you do shoot wide open and you find things aren’t as sharp as you expect, then perhaps it’s worth going through this exercise. For me, it began with portraits I shot at f/2 using a 135mm prime lens. Even after carefully aiming my center focus point on the subject’s nearest eye, I could see the sharpest point was actually at least an inch or so behind the front of the eye and the eye itself was slightly soft. An autofocus fine-tuning adjustment was part of the solution. (I say “part” because that Nikon 135mm f/2 DC lens continues to be an untamed animal in my zoo of lenses. The DC “Defocus Control” feature is both a blessing and a curse.)

I first mentioned autofocus adjustments and the LensAlign (shown above) from Michael Tapes Design back in January. This is the tool I’ve used for measuring front- and back-focusing for the past two years. The concept is simple: You focus on a vertical pattern that’s aligned with a sloping scale, make an exposure, then examine the image to see what area on the sloping scale is actually in focus. You don’t really need to spend US$80 for this. You can use almost any high-contrast pattern and just shoot it at an angle. There are even patterns in PDF format that you can download for free. (Bernard Knaepen has posted an interesting and free technique.)

But I find using the LensAlign and other similar systems to be an inaccurate process. It’s usually a challenge to interpret the results — a fairly subjective process. For the past two months I’ve been working with Nikon to try and understand the autofocus problems of my Nikon D800E and I’ve been using flat test patterns on the wall. I haven’t been concerned about fine tuning since the issue is about a variation from one autofocus point to another rather than an overall adjustment.

While I was in the middle of this D800E issue, Michael Tapes released a new tool: a desktop application (Mac and Windows) called Focus Tune. Through December 31, 2012 it costs US$29.95 or just US$19.95 if you already own a LensAlign and it’s well worth the price. In fact, it’s so useful I suggest you get Focus Tune instead of (not in addition to) a LensAlign.

Compared to LensAlign, Focus Tune works in reverse, sort of like the game of Jeopardy. Rather than a tool that suggests what the autofocus fine-tuning value should be, you start by shooting tests at a range of values and the software tells you which is best. Take a look at the chart below, which was generated by Focus Tune for tests using a Nikon 28-300mm f/3.5-5.6 lens at 100mm f/5.3 (wide open) on my Nikon D600.

The data were collected in two steps. First I shot four high-res JPEGs using each of nine autofocus fine tune settings in steps of 5: -20, -15, -10, etc., through +20. I then ran the images through Focus Tune, looked at the results and saw that the peak was somewhere between -10 and 0. So I went back and shot four images for each of the remaining eight settings in that range. From this and the associated tabular data, I determined that the optimal setting for this lens on this body is -4.

How does Focus Tune do this? You tell the application what area of your test images to analyze and it then comes up with a “sharpness value” for each image. By taking multiple exposures at each setting, Focus Tune can deliver a very consistent result and ignore the “outliers” which appear as red dots on the chart. (Note  this lens/body combination was already working well. Although I did set the autofocus fine-tune value to -4, I could have shot forever and never noticed this small offset.)

Here’s an example showing a combination that requires a larger adjustment: a Nikon 14-24mm f/2.8 wide open at 18mm on my D800E. When I added tests in the 15-20 range, Focus Tune reported that +18 was the setting that yielded the sharpest results. 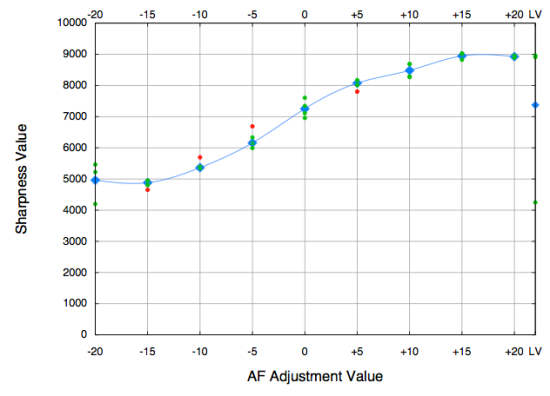 Focus Tune is able to extract a great deal of information from the EXIF data in your JPEGs. For example, it knows which autofocus point you used to capture the image. This means Focus Tune can generate other reports including one that compares the accuracy of different autofocus points. It’s been a great help in diagnosing the D800E autofocus problem. Here’s a chart from test images using the 28-300mm f/3.5-5.6 at 100mm and f/5.3. C-C is the center point, while C-L5 is the far-left one.

From the above chart you can see that the accuracy of the farther left focus points are decreasingly accurate and that the far-left one is significantly worse than the others. Note that the centermost C-C and CL1 are phase-detect or “cross-type” sensors whereas the other four are the less accurate contrast type. Also note  this is not a test of lens sharpness. In all cases Focus Tune is evaluating the sharpness at the center of the image regardless of which autofocus point was used to set the focus.

Focus Tune is in its first release and it’s still a bit rough around the edges. There are a few user-interface peculiarities, but it doesn’t take long to understand how to use it. If you’re curious, start by taking a look at the introductory video on Michael Tapes’ website. Although Michael demonstrates Focus Tune in combination with a LensAlign, I think you can get just as good results by using a good flat autofocus chart so long as you make sure the sensor plane of your camera is parallel to the target.

I’ll be using Focus Tune as part of my toolkit as I continue to track down the D800/D800E autofocus problems.

There have been some discussions online about an autofocus problem with the new Nikon D800 and D800E bodies, and there’s been a fair amount of misinformation about this problem published as well. It’s not at all clear how many D800/D800Es have this problem, but I’ve confirmed that my D800E does. This post is to document the problem and to help others determine for themselves if their bodies suffer from this as well.

First, here is the focus test pattern, shown as a scaled JPEG from the full-frame image. The patterns are placed carefully to align with the leftmost, center and rightmost autofocus points. This particular set of tests was done using Nikon’s 24-70mm f/2.8 zoom set at 48mm and f/2.8. I repeated the tests with a 24mm f/2.8 prime with virtually identical results, but not shown here. 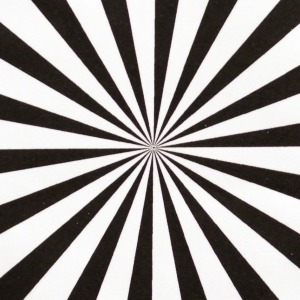 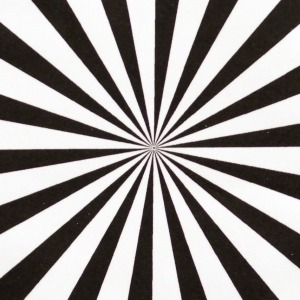 The superimposed images below are crops of the left test pattern. For the “before” image, I focused on the left pattern manually using LiveView. For the “after” image I used regular (non-LiveView_ autofocus selecting the leftmost focus point. As you can see, autofocus using the leftmost autofocus point is off. This is 100% repeatable using a variety of lenses. 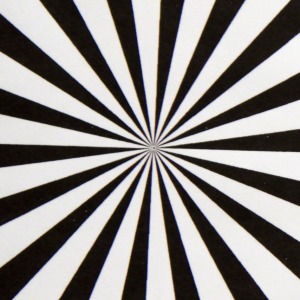 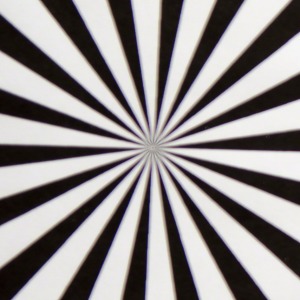 I called the Nikon Service Center about this. The representative was initially vague until I told him I’d run these tests and had the results available. He acknowledged the problem and told me it’s correctable. I asked him whether I should return the camera to the retailer from which I purchased it or send it to Nikon for  warranty service, and he recommended the latter. After all, there’s no guarantee a replacement wouldn’t have the same problem.

My new D800E is heading to Nikon tomorrow. Wish me luck!

Update 9/11/12: I didn’t get around to sending the D800E to Nikon in El Segundo, California, until 9/6/12, but Nikon’s online status page says Received 9/10/12. It’s now “In Shop” in Category B2: Moderate Repair: Major Parts Replace. The description of the problem includes “Optical Alignment”. It will be interesting to see what the actual fix turns out to be.

Update 9/17/12:  Got the D800E back from Nikon today, so 11 days door-to-door. The work order merely said “Adjusted Autofocus” so who knows what they did. I had to leave for a trip and didn’t have a chance to test it, but I’ll give a thorough report next week.