Frederick Van Johnson and I explore the Sony QX10 and QX100 “lens cameras” in this episode of All About the Gear.

Once again, Sony is showing that it’s not afraid to innovate and put out breakthrough products that might be a bit ahead of their time. The QX cameras are definitely in that category. Not yet ready for prime time, they may be more an indication of what’s to come than the end of a line.

The QX10 is a $250 zoom lens without a camera body. Okay, that’s not quite true. What’s missing are most of the controls and any viewfinder or display. Those are provided by your mobile device (smartphone or tablet) via WiFi. You run a special app on your phone, connect to the QX10 using WiFi and (if available) NFC, and use your phone to zoom, preview the image via a live video stream from the lens, take a picture, then retrieve the image. The “lens camera” includes a shutter, sensor and microSD memory card, where the high-res (JPEG) versions of captured images and videos are stored.

At the rear of the lens is a fold-open clamp that can be used to attach the lens to the back of your mobile phone. This makes the combination of devices look and (almost) work like a point-and-shoot camera with a rear LCD display. However, when combined with your phone, the whole thing becomes slightly larger than a typical p&s camera.

There’s no flash, so I thought I’d try to use one of the flashlight apps on my iPhone to illuminate a dark scene. No go. When I switched from the flashlight app to Sony’s Play Memories app to control the camera, the light went out. Maybe you can do this on an Android device. I didn’t have one for testing.

The lens cameras have removable batteries that you recharge through a USB cable.

Also be aware that when paired with the QX camera, there appears to be quite a drain on your phone’s battery. So long as you’re connected, you’re streaming live video over WiFi and that seems to require quite a bit of power. I noticed my phone’s battery discharging at an unusually high rate.

With most cameras, a mobile app is an optional feature. With the QX cameras, it’s THE entire interface, which is why I want to discuss it so early in this review. Unfortunately, as compared to other manufacturers’ mobile apps (notably Panasonic’s), Sony’s Play Memories is one of the weakest. To some extent it’s limited by what can be communicated to/from the camera as I’ll discuss below under API. But for whatever reason, Sony’s mobile app (at least on an iPhone) just isn’t very good. In general it’s sluggish, the connection is unreliable, and the functionality is quite limited. Play Memories is available for iOS and Android, but not for Windows phones.

If you have an Android device, you can use NFC to establish a connection to the camera fairly quickly. If you’re using an iOS device, you have to go through the process of connecting to the camera’s internal WiFi network and entering a password. And if you lose that connection, you’ll have to re-establish it. Forget about getting that spontaneous shot. We’re talking at least fifteen seconds before you can take a picture.

Once you’re connected, you’re limited to zooming, focusing, setting exposure compensation, taking a photograph, and reviewing that photograph on your mobile device. The good news is that as the APIs to the QX cameras improves, there’s room for improvement in the Play Memories app as well.

The camera sports a 1/2.3″ (7.76mm) 18MP CMOS sensor backed by Sony’s BIONZ processor. It’s essentially the same as a typical mid-market point-and-shoot camera. The ISO range is 100-3200. There’s a cap of ISO 1600 in Program Auto mode, although it cranks up to ISO 12800 in multiple-exposure Superior Auto mode.

The higher-end QX100, however, comes with the same terrific 1″ 20MP sensor and processor found in the RX100 II. Probably because of its much larger pixel photodiodes, all of its ISO maximums are double those stated above for the QX10 (ie, ISO 6400 max in normal Auto mode).

The QX10 is based on a 10x zoom 4.45-44.5mm (25-250mm full-frame equivalent) with a variable aperture of f/3.3-5.9. Given the limitations of such a wide zoom range and small aperture, the quality of the lens is quite good. The more expensive QX100 uses the same lens found in the remarkable RX100 II, a Zeiss 3.6x zoom (28-100mm equivalent). Both lenses include Sony’s Optical SteadyShoot image stabilization, which works quite well. This makes it very reasonable to hold a QX camera in one hand while holding your smartphone in the other.

The QX10 is autofocus-only, but it includes Touch AF that allows you to pick your focusing spot on your mobile device. The QX100 specifications say it also supports manual focusing, but as I didn’t have one available, I couldn’t test that feature. 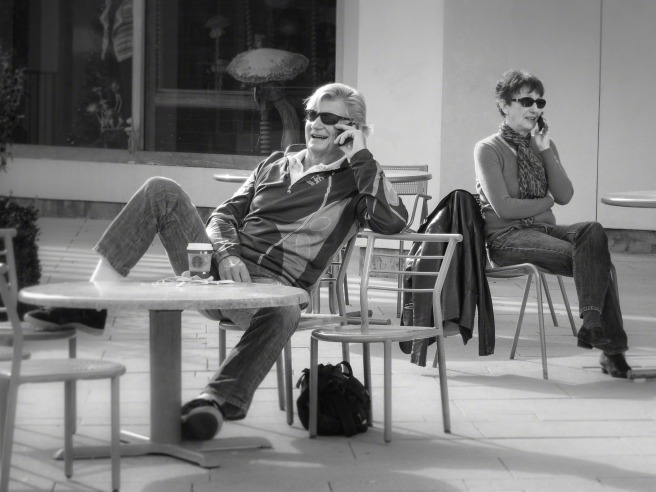 There’s only one metering mode on the QX cameras: Multi-Pattern. It works fine. You can adjust the white balance (including an Auto mode), which is important because these cameras save only JPEG images. There’s no way to get a RAW image out of them as far as I can tell. And while the QX100 has the option to shoot in either aperture- or shutter-priority mode, the QX10 does not.

The QX10 has  Program mode, which isn’t really the same as P mode on most cameras. In this case it simply means you get an exposure-compensation control to adjust your exposure +/-2EV in 1/3EV stops. You don’t really have control over the balance between shutter speed and aperture as you do in a traditional Program mode. Exposure compensation isn’t available in either of the Auto modes.

Because of the form factor and remote control, I expect many uses for the QX products will be for video. The QX10 records MPEG-4 AVC/H.264 .mp4 video at a max of 1080p 30fps and at 12Mbps. That’s only so-so by today’s standards. Many small cameras can shoot at 60fps and deliver an HD stream of at least double that bit rate.

If you’re not a software developer, just skip this section. For those who are…

The Sony APIs require that the camera run the Smart Remote Control app v2.0, which the QX cameras have built-in. Other Sony devices you can control via the APIs include the NEX-6, -5R and -5T, the HDR-MV1 (video) and the new a7 and a7R. For more info, see Sony’s developer website.

As of this review (API v2.0.0, documentation v1.20) the functionality is rather limited, but it would make sense for Sony to open up more capability over time. As of now, here’s what you can do via the APIs:

The APIs are based on HTTP POST requests — the camera appears as a server, your app as a client — and uses a simple JSON syntax, which makes it platform agnostic.

I think this is a great camera to play around with so long as $250 (or $500 for the QX100) is within your budget for toys. Particularly if you’re adept at writing code for mobile devices and using Sony’s APIs, there are all sorts of things you can do with these lens cameras.

But as a way to upgrade the quality of your mobile images, I think you’ll be better off looking at a more traditional point-and-shoot camera. At the high end, check out the Sony RX100 II, which I recently reviewed. It’s essentially the same optics and sensor as the QX100, plus a lot more features and you can take a photo within seconds of the time you pull it out of your pocket. That just isn’t going to happen with the QX cameras. If the RX100 II is too pricey, there are many less expensive but still worthy p&s cameras out there to choose from and they’ll fit into your pocket at least as well as the QX lenses.