I’ve had the new Nikon D800E for less than a week, but already it’s proven to be everything I hoped for. Let’s begin by looking at a simple comparison to the also superb Nikon D3s. The following images were shot with a Nikkor 70-200mm f/2.8 at 200mmm f/8 and 1/400 sec. The first image is scaled from the uncropped original from the D3s. Although the D800E’s sensor has more pixels, it’s the same size as the D3s (full 35mm frame equivalent) so both cameras have the same field of view. Yeah, I know it’s not an interesting shot. But I wanted to see how much detail I could capture a half-mile away. 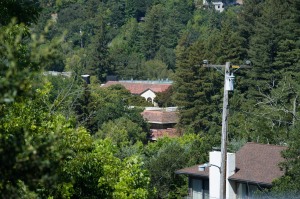 The second split-screen image demonstrates the differences between the two sensors. (Click on the image to see it at 100%. You may need to maximize your browser window and perhaps zoom in. The image is 1920×1280 pixels.) 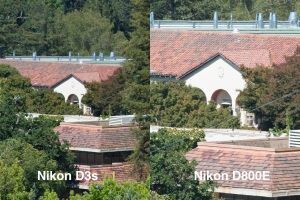 Other than large prints and/or tight crops, what’s the benefit of the D800E? Take another look at the above image at full size. In the very center of each crop is some text in the shadows. At 100% you can nearly make out the name on the building in the D800E version. At 200% it’s easy to read. In the D3s version, you can’t read the name regardless of how much you enlarge the image. That’s the real difference between these cameras.

But this much detail does come at the cost of some very large files. For example, the RAW file (14-bit, lossless compression) from which the above D800E image was made is 48.1MB! When converted to a DNG file in Lightroom it shrinks slightly to 42.9MB. The uncompressed RAW files are a whopping 74.4MB. At that size, a 16GB CF card holds only 340 shots. (I just bought my first 64GB card.) When you start tweaking these images in Photoshop with layers and SmartObjects, your files get big quickly and certain compute-bound operations such as noise reduction are noticeably much slower than for the D3s’ far smaller files.

The only difference between them is that for an additional US$300 the “E” model doesn’t have the usual anti-aliasing filter in front of the sensor. The advantage is a slight (and I mean really slight) improvement in detail. From other reviews I’ve studied, I wouldn’t expect to see any difference in the rather unscientific tests I performed above. The disadvantage is that you may see moire patterns when photographing images with fine repeating lines. I’ve already seen this when shooting through a screen door, for example. If you’re only shooting still images and using Lightroom 4, this isn’t really an issue since LR4 now includes a software moire filter. Where it would be a problem would be if you’re shooting video. In that case removing moire can be quite time consuming. Bottom line: Buy the “E” version only if you’re like me, (a) don’t shoot video, and (b) are likely to test your camera’s resolution before you take a normal photograph. Video on the D800 is gorgeous, so if you think you’d like to use it, stay away from the D800E.

Now to the first question: should you buy one at all?

I would not recommend this as your only DSLR or as a general-purpose camera. I think of the D800(E) as a tripod-only camera for carefully planned and executed shots. Sure, you can use it handheld and you can shoot your kids’ birthday parties with it. But for those tasks I’d rather use an older D700 or even the cropped-sensor D7000. Shooting casual pictures outdoors in daylight? I’d probably grab my Sony NEX-7 instead. Shooting action/sports or in low light, it’s the D3s without question. But for landscapes or other detailed images, particularly those I’m likely to print, the D800(E) is my camera of choice.

Now I just have to pay for it. The D700 and my few remaining DX (cropped-sensor only) lenses are going onto eBay. In addition to the D3s, I’m going to hang onto my D7000. It’s just perfect when I want a versatile camera that weighs less than a cinder block but is better in low light and has better glass than the NEX-7.