This is a fascinating case, particularly for me both as a photographer and a fair-use advocate. You should probably read the story for yourself, but I’ll summarize it here. Andy Baio is well-known and respected in the tech world. He produced an album (Kind of Bloop) based on the songs from Miles Davis’ classic album, Kind of Blue. He got all the permissions and rights he needed to the music, but when it came to the album art, he created a somewhat pixelated version of the original image without getting any permission. It turns out the orignal album-art photo was taken by and belongs to a great photographer, Jay Maisel. Jay sued Andy and they settled out-of-court for $32,500. Andy still feels he was right based on the concept of “fair use.” Here are the two versions: Jay’s original and Andy’s interpretation. 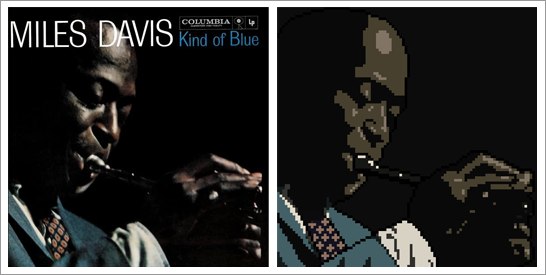 What do you think? Should Andy have been able to sell his album using the cover on the right without first getting permission from Jay? Would you say that Andy’s version qualifies as “fair use” of the original? It’s a tough call for me.

First, you should know that I’m a supporter of and contributor to the Electronic Frontier Foundation (EFF), who played a role in this case, so I’m a strong believer in the fair-use concept. I believe our copyright laws are severely inhibiting creativity and are increasingly just serving a copyright consortium rather than serving the public good, as originally intended. I have some experience in copyright, trademark and other intellectual-property law, but I am not an attorney. I’m a layperson who has taken an interest in this area for decades. Most notably, I am not up-do-date on the latest details of the fair-use doctrine. In other words, I’m not qualified to give a legal opinion about who is right or wrong in this case — only an emotional one.

Given that disclaimer, I do have an opinion, event though it’s not based in law. To me, I think Andy’s image is a derivative work that goes beyond what I consider to be fair use. From a purely practical point, I can’t figure out why Andy didn’t try to get permission to use Jay’s image in the same way as he did for the music? Did he think it was somehow more incidental? If you’re a photographer, your images are as important to you as a song might be to its composer. This is an iconic album cover, which on one hand suggests that it’s fair game for fair use, but it’s also a work of art and deserves the same protections as any other.

Ultimately, Andy asks an important question at the end of his blog post (scroll to the bottom of the page) where he writes, “Extra credit: Where would you draw the line?” Is there some point in abstracting the image at which the original image is obscured to the point at which the derivative work is no longer infringing of Jay’s copyright? Is this even a legitimate way to evaluate the issue? A fascinating debate in any case. What do you think?

Update: I should have mentioned that I first heard about this from Thomas Hawk, for whom I also have great respect. In this case, however, I disagree with him. But check out Thomas’ blog post and the comments.