On January 19th I tweeted “Getting ready for a trip to the Middle East. Decided to register with the State Department. You just never know.” Six days later I stepped out of the Egyptian Museum in Cairo to find a scene reminiscent of Berkeley in the 1960s: a stream of demonstrators running past the museum towards Tahrir Square. 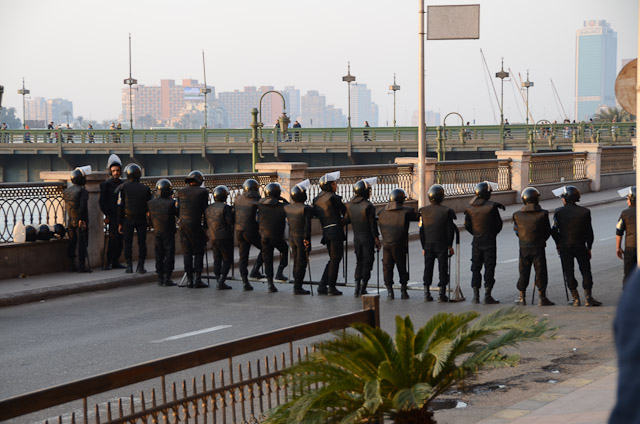 My wife and I had been in Egypt for a little more than a day with a group tour of 22 other random American travelers. We didn’t think much about it at the time, but our group had been driven from the Semiramis Intercontinental Hotel along the Corniche el-Nil by bus even though the walking distance was only three blocks. We had noticed over the previous 24 hours that police in Cairo were everywhere, but that seemed to be the norm. Later that afternoon I would post on Facebook “Police shut down much traffic here in Cairo this afternoon due to a larger-than-expected demonstration. Took a while to make it back to our hotel. Seems like a large % of Egyptian males are employed as policemen.”

Even before the protests began, we were constantly accompanied by armed plainclothes tourist police. Either we had one aboard our bus or we traveled in a convoy with an armed escort vehicle or both. It seemed a bit over-the-top, but this was the Egyptian reaction to the massacre of 62 tourists in Luxor in 1997. As we drove through Tahrir Square to the museum that afternoon, however, we saw armored personnel vans and standing rows of riot police with helmets and shields. That definitely qualified as out of the ordinary, but we were only told it was National Police Day, and that demonstrators had decided to use that as an opportunity to protest.

The Egyptian Museum is surrounded by an iron fence. Our armed chaperones and the local police would not let us exit the grounds. They were communicating with our driver, who was trying to maneuver the bus into a position such that we could avoid walking towards the growing crowd of protesters. The officials closed the museum behind us at about 4pm. We would be the last visitors to the museum for some time. After about an hour we scurried to the bus, which then had to negotiate a rather circuitous course for the three blocks back to the hotel. The Corniche was blocked by rows of riot police directly in front of the hotel.

Once inside the hotel, my wife headed to our room while I borrowed her iPad to take advantage of the free WiFi in the lobby. After ninety minutes or so I went upstairs. My wife said, “Where have you been? You’ve got to see what’s happening outside.” For the next few hours we watched the growing numbers of demonstrators and police battle in and around Tahrir Square from our 25th-floor vantage point, a block away. Tear gas, rock throwing and what sounded like occasional gunfire, possibly rubber bullets. I took a few pictures and even recorded some short videos. It seemed to us like just another protest demonstration. Had I known what was to come, I would have shot a whole lot more. But still jet-lagged, we went to sleep around 1am. 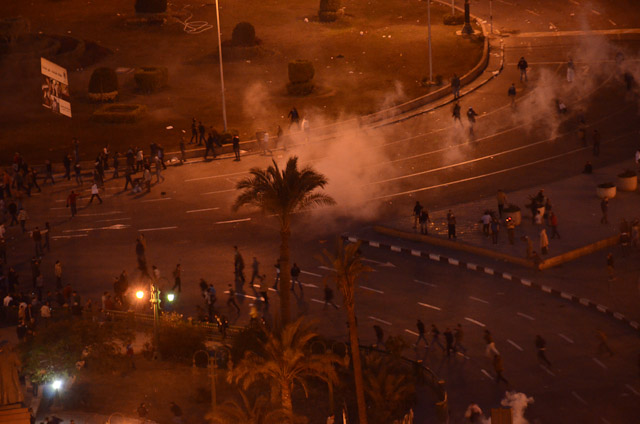 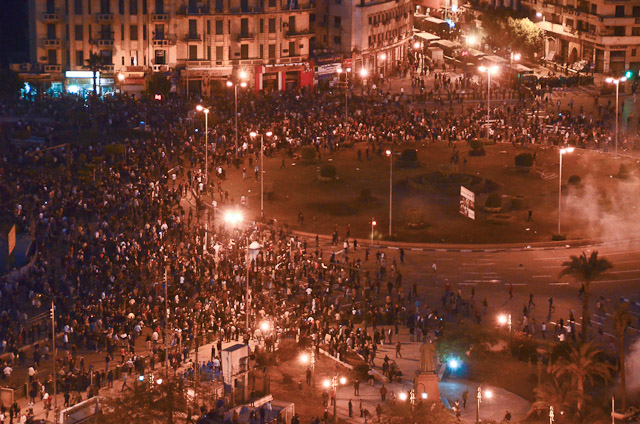 The following morning it seemed like all was quiet, and we continued our tour with a full day of sightseeing in the area immediately surrounding Cairo. Other than our omnipresent security detail, nothing seemed unusual. Back at our hotel that night, there were again protests in Tahrir Square, but by now seemed so ordinary that I didn’t even bother to break out the camera. The only impact was that we couldn’t walk out to a planned restaurant for dinner. We were told it wasn’t safe enough, particularly for groups of more than a few people. We were confined to the hotel for the evening.

Thursday morning we drove across the Nile to Giza and spent the day visiting the Great Pyramid of Cheops, the Great Sphynx and other attractions. We were again accompanied by our security detail, but little did we know that once again we would be among the last visitors to a major tourist site. Giza was closed to tourists starting the following day. We managed to keep one step ahead of a wave of lockdowns throughout Egypt.

A “day of rage” was scheduled throughout the country for the weekly Muslim holiday, Friday, January 28, 2011. We avoided it by awakening at the painful hour of 1:30am to head for the airport and a flight to Aswan. From there we drove further south to Abu Simbel. This was the day when all hell broke loose in Egypt. Twitter and Facebook had been blocked for two days, but now the government shut down the entire Internet. Even mobile-phone service was disabled in most areas. ATMs were down. Banks were closed. Commerce was grinding to a halt. Our only communications were one way: CNN International and the BBC via satellite TV. Those tens of thousands of police were gone — vanished from the streets of Eqypt. That night many of the police stations were ransacked and torched.

We boarded a 60-passenger ship to cruise Lake Nassar behind the Aswan dam, and for the next three days we watched developments throughout Egypt on TV, the same as everyone else on the planet.

We arrived back at Aswan on Monday, January 31 and were told to expect to evacuate via a flight the next morning to Cairo. By this time the roads in and out of Cairo were closed and national railway service was suspended. One woman managed to reach the U.S. Department of State in Cairo via phone. A recorded announcement told her to visit the Department’s web site. (Hello: There’s no Internet here!) Given what we were seeing on television, we didn’t relish the idea of getting to (and perhaps stuck in) the Cairo airport, so when we got to the Aswan airport and discovered that all in-country air travel had been suspended as well, we were actually relieved. After only a half hour in the Aswan airport, we went back to the Movenpick hotel and spent the day sightseeing in and around Aswan. There were army tanks all around the dam, and we heard (but didn’t see) demonstrations, but we fell in love with this underrated town on the Nile. 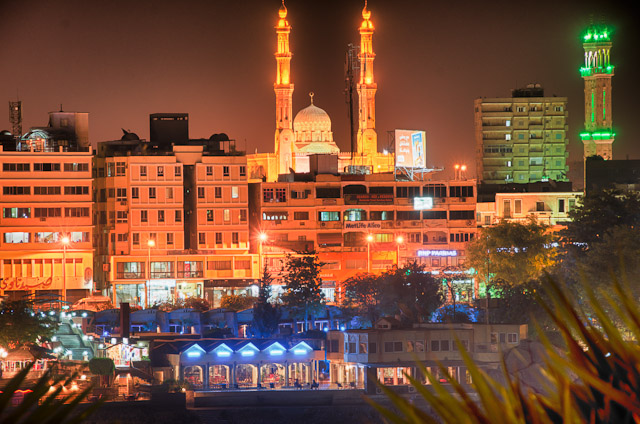 Finally, on Tuesday, February 1, 2011, we got word that a charter flight would meet us that night at the Aswan airport to evacuate us to Amman. Given that most scheduled flights were canceled, the airport wasn’t crowded. We waited until 8pm or so, when the brand-new Embraer 175 arrived. It was like the closing scene of Casablanca. As we climbed the boarding stairs in the dark, a uniformed Royal Jordanian flight attendant on the top landing said, “Welcome to Jordan.” I wanted to give him a hug. 90 minutes later we landed in Amman.

We still didn’t have a flight out of Amman, so we got to spend two nights there. On February 3, we managed to get a scheduled Royal Jordanian flight to JFK, and spent the night at the Sheraton Hotel. The next morning we boarded an American Airlines flight for SFO. By 3pm on Friday, February 4, we were home: safe, sound and tired. Our neighbors had covered our front door with a Welcome Home banner.

We had the remarkable privilege of witnessing what may become known as the start of a revolution throughout the Middle East. We will forever be able to say we were there to see it happen. Had we arrived in Cairo three days earlier, we would have missed it. Two days later, and our trip would have been canceled. An amazing coincidence. My wife says we were meant to be there. I think she’s right.

I must thank the extraordinary people at Odysseys Unlimited who ran our tour.  Their efforts to get us out of Egypt while simultaneously allowing us to see as much of this beautiful country as possible were truly heroic. Day after day, we were amazed at how hard they worked for us. The U.S. Department of State was overwhelmed and had trouble even getting its own employees out of the country. We bumped into guests on other tours: None of them had a team working for them like we had from Odysseys. Everyone in our group agreed, we’re their ambassadors for life.

As dramatic as our story may sound, I want to be clear that we never felt endangered or threatened in any way. The Egyptian people were consistently warm and friendly. (The food was awesome.) They were at once excited and fearful of the changes coming to their country, but always protective of us. Our guide, Amin, is a remarkable and passionate human being. He’s now family. In a subsequent post I’ll explain what we learned from Amin and other Egyptians about what this revolution means to them and their country and what I believe it implies for U.S. foreign policy.

You can see my complete Flickr photo set slideshow from the trip.

26 thoughts on “Exodus from Egypt”